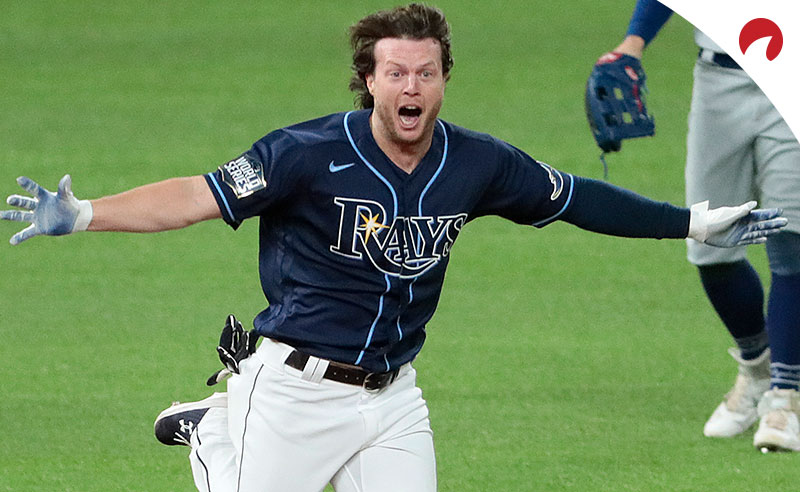 Up 2-1 in the World Series and with a chance to take a stranglehold in Game 4 on Saturday, the Dodgers let their lead slip away late and the Rays pulled off one of the most memorable come-from-behind wins in World Series history in an 8-7 triumph.

Rays Walk-Off the Dodgers in Game 4

Down to their final out and with two runners on base, the Rays sent Brett Phillips to the plate to face Kenley Jansen. After falling behind in the count 1-2, Phillips lined a single to center field. Kevin Kiermaier easily scored to tie the game at 7-7, but Dodgers center fielder Chris Taylor bobbled the ball.

After witnessing Taylor’s error, Randy Arozarena rounded third but tripped halfway to home plate. The throw to the plate had Arozarena beat, but catcher Will Smith missed it, leaving Arozarena to score the walk-off run.

The Dodgers sit at -175 at the best baseball betting sites to win the World Series and are trying to win the Fall Classic for the first time since 1988.

Game 5 is set for Sunday, with Clayton Kershaw and Tyler Glasnow taking the ball for the Dodgers and Rays, respectively. The Dodgers have opened as -170 favorites and the Rays are coming back as +145 underdogs. As of Saturday morning, the total was sitting at 8.

For a full betting preview of Game 5, check out Dave Consolazio’s preview.

With it being the World Series, there’s a great opportunity to bet on MLB Series Prices odds and a variety of props released by online sportsbooks like “how many games will be played” and “winner/number of games” that can offer more value than just betting a straight-up winner.

Read our How To Bet On Baseball Guide if you’re new to baseball betting or need a refresher, and make sure to keep track of the latest odds with MLB Futures.

Odds as of October 25 at Bovada

How to Watch the 2020 World Series

Why the Dodgers Will Win the World Series

Star power, slugging, starting pitching – there are a lot of obvious reasons why the Los Angeles Dodgers should be the favorite in World Series odds. They have a certified ace in Walker Buehler and a potential one in Clayton Kershaw if he can ever get over his playoff yips, along with a slew of arms that can make an opposing batting order struggle to put up runs.

When you look at the batting lineup, it’s like somebody decided to cheat the system in MLB The Show. Acquiring Mookie Betts from the Red Sox has given the Dodgers added pop at the top of the batting order that’s now a murderers’ row. Nearly every hitter can go yard at any time.

At this point, the only thing standing in the way of the Dodgers winning their first World Series since 1988 is mental lapses. Los Angeles has been a championship contender for the last seven seasons and always has seemed to find a way to blow it. Outside of that random variable, it’s hard to find a reason to pick against Dodger blue.

Why the Rays Will Win the World Series

In a “David vs Goliath” style of matchup when it comes to team payrolls, it’s easy to dismiss the Tampa Bay Rays when it comes to World Series odds and that’s likely fine by them. Casual fans may not be able to name more than three Rays players but don’t take their anonymity as a weakness because Tampa Bay is the deepest team in MLB.

Take a guy like Randy Arozarena, for example. The starting left-fielder for the Rays, technically still a rookie, leads the team with seven home runs in the 2020 postseason and was just a throw-in in a trade with St. Louis in the offseason. It’s players like this that the Rays have found off the junk pile to turn into critical contributors and that’s one of the many reasons why Tampa Bay can’t be dismissed.

The Rays already have a trio of high-end starting pitchers in Blake Snell, Charlie Morton and Tyler Glasnow but also have the best bullpen in MLB with the ability to go the “opener” route for any given game. If Tampa continues to get timely hitting and the pitching remains elite, they can easily win the 2020 World Series.

What is a Futures Bet on World Series Odds?

When you visit your sportsbook of choice, you’ll see an option to bet on which team will win the World Series. This kind of bet is a futures wager, which means you’re betting on events that will happen in time. Oddsmakers release action on the Fall Classic before the season starts and adjust the lines as teams surge and stumble in the standings.

Our Odds Calculator can help you determine how much you’d pocket depending on the odds and the amount bet.

The earlier you can make a futures bet the better, because you’ll see higher returns since World Series odds ebb and flow depending on a team’s overall performance, injuries to key staff, and how they stack up against the rest of their division.

However, you’ll need to handicap your bets accordingly. Luckily, we’ve got you covered with everything baseball: