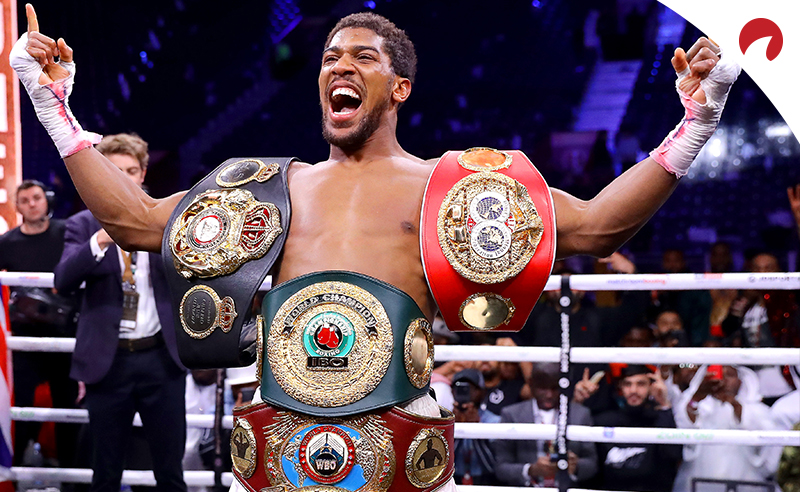 The WBA, IBF, WBO and IBO heavyweight titles will once again be up for grabs this fall when Anthony “AJ” Joshua defends his titles against IBF mandatory challenger and former world champion challenger Kubrat “Kobrata” Pulev. Taking a quick look at the Joshua vs Pulev odds, it should come as no surprise that AJ is the sizable favorite.

The two will now settle their differences on December 12 after they were set to do battle in the summer. Of course, that fight was postponed due to the coronavirus pandemic. It is likely Tyson Fury and Deontay Wilder will end their trilogy around the same time to set up a bout to crown the first undisputed heavyweight champ since Lennox Lewis in 2000.

Online sportsbook Bovada has released the Joshua vs Pulev odds and lists the current heavyweight champion, Joshua, as a -1200 favorite with the mandatory challenger, Pulev, coming back at +700. That means you would have to wager $1,200 to profit $100 on AJ, while a $100 bet on Pulev would profit you $700.

Odds as of December 2 at Bovada

Sure enough, the Mexico native, Ruiz, stopped Joshua in the seventh round to become the WBA, IBF, WBO and IBO unified heavyweight champion. The title reign was short-lived, though, as AJ enacted his rematch clause and reclaimed his belts in December.

This just goes to show that nothing is certain when it comes to betting on combat sports, even in a major title fight. Now, I’m not saying to go to the teller and lay your mortgage on Pulev at +650, just that history is there for a gigantic upset. Additionally, the Bulgarian’s lone professional loss came in his only world title fight, getting stopped in the fifth round against Wladimir Klitschko in 2014.

Joshua showed an evolution to his game his last time out, looking more like a traditional boxer, sticking and moving to avoid any punches coming his way, and out-pointing Ruiz en route to a decision victory.

Prior to that fight, AJ typically was the aggressor, bullying opponents around the ring looking to get his hands on them and score the knockout victory. That method also put him in danger of getting into a firefight, which led to him getting knocked out in the first bout with Ruiz. He was also rocked early in his Alexander Povetkin fight in 2018.

Pulev is more patient, walking his opponents down, and is quite hesitant to let his hands fly. He works well behind his jab but has to be in close proximity to really fire it. At times, Kobrata will throw crisp combinations both to the body and the head. Defensively, he does a good job tying up his opponents when they go to engage with him, and because of his constant jab, he stays far away from their power.

AJ could probably go back to his aggressive self in this fight with few repercussions. Of Kubrat’s 28 pro wins, only 14 have been by knockout and he has just one win in that manner over his last four fights. With Joshua wanting to have a statement win perhaps ahead of a potential bout with Tyson Fury to crown our first undisputed champion since Lennox Lewis in 2000, I think he runs through Kubrat.