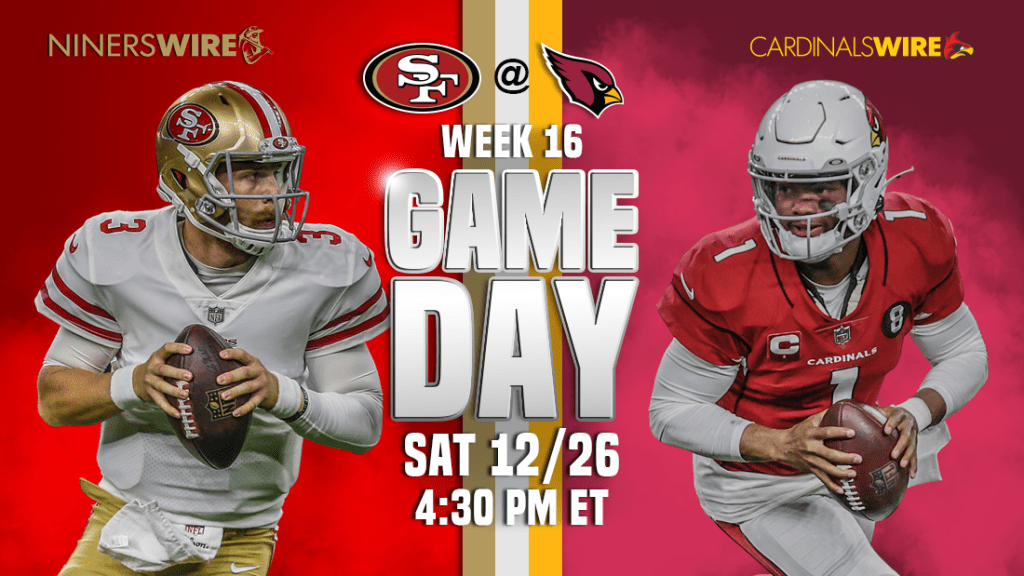 The 8-6 Arizona Cardinals take on the 5-9 San Francisco 49ers in one of three Saturday games today. It is the second time the two teams meet. The Cardinals defeated San Francisco 24-20 in the season opener. They need a won to maintain control of the seventh and final wild card seed in the NFC, while the 49ers are now only playing spoiler.

Are you planning on watching or listening to the game?

Here is the info you need.

This is a nationally televised game but it is streaming only. It will stream on Amazon Prime Video and also on Twitch. It will also be available on network television in the Cardinals’ and 49ers’ home markets. In the Phoenix area,. it will air on FOX 10 and on KNTV in the 49ers’ home market.

There are multiple broadcast feeds. The main feed which will be on FOX10 and KNTV is with Andrew Catalon and James Lofton in the booth with Sheree Burruss on the sideline. An alternate broadcast feed has Andrea Kremer and Hannah Storm. The scouting feed has Daniel Jeremiah, Bucky Brooks and Joy Davis. The Spanish language feed has Jose Antonio Melian calling the game.

The Cardinals’ radio broadcast will air on Arizona Sports 98.7 FM. Dave Pasch and Ron Wolfley are out this week because of exposure to COVID-19, so Paul Calvisi and Bertrand Berry will call the game.

The Spanish broadcast can be heard on KHOV 105.1 FM. Luis Hernandez and Rolando Cantu will call the game.

The Cardinals radio broadcast can also be heard on Sirius channel 88 and XM channel 88, as well as the SiriusXM Radio app.

Listen to the latest from Cards Wire’s Jess Root on his podcast, Rise Up, See Red. Subscribe on Apple podcasts or Spotify.