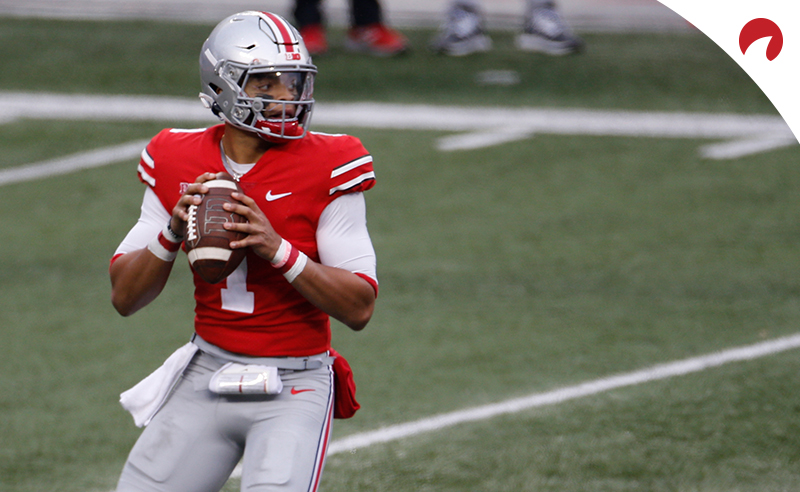 We’re heading into conference championship weekend with the always exciting bowl season on the horizon. It won’t be long before the College Football Playoff begins.

Each week, I sift through the numbers to pluck out my favorite bets and offer a little reasoning behind the picks. We had a 3-3 record last week and are now 26-38 on the year – when will 2020 end? We will look for a winning week as we get primed for bowl season.

Without further ado, here are my best bets for conference championship weekend of the college football season.

New to the college football scene? Check out our handy college football betting guide to help you get in the action. Also, keep an eye on our College Football Odds page for the latest up-to-date betting lines.

As per usual, I try to sneak in a game before Saturday and this week I like Nebraska -6.5 vs Rutgers on Friday night. These are two very evenly matched teams offensively and defensively, though Rutgers puts a little more emphasis on the aerial attack, while Nebraska has a more balanced attack on the ground and through the air.

Head-to-head in the quarterback play, I like Adrian Martinez (NEB) much more than Noah Vedral (RUT) and overall, on both sides of the ball, I think the Cornhuskers are just the better team.

Northwestern Wildcats vs Ohio State Buckeyes -20.5 and OVER 57.5

We’ve got a two-play for the Big Ten championship and I like the favorite to win in a big way in a high-scoring affair. Now, to be fair to Northwestern, there may be opportunities for it to move the ball through the air on this suspect Ohio State secondary, but if the Wildcats plan to go shot for shot with the Buckeyes, that’s a losing plan.

Ohio State is extremely dangerous both through the air with Heisman Trophy hopeful Justin Fields and on the ground with Master Teague III; the team averages more than 250 yards per game in both areas. Ohio State also racks up 46.6 points per game and has an average winning margin of 16.6 points. With a CFP berth potentially on the line and the Buckeyes needing a big performance to cap a shortened season, they are going to be chomping at the bit for a beatdown.

I faded the Utes last week vs Colorado and if you can’t beat ’em, join ’em. After dropping its first two games of the season, Utah appears to have jelled and become the formidable team we have been accustomed to seeing in recent years. Washington State, on the other hand, is a hard team to judge with just three games played. The Cougars have gone 1-2 with the two losses coming against the squads playing in the Pac-12 championship game.

It is the Cougars defense that makes them a team you want to fade, giving up 36.3 points per game, including 307.7 passing yards per game. However, my attention is on the Utah ground game – freshman running back Ty Jordan has been running downhill in the Utes’ two straight wins, rushing for 314 yards with three touchdowns in those contests. Look for him to run wild on Washington State as Utah cruises to victory.

In the Mountain West championship game, I like the UNDER 56 points, though that line has jumped up from the opening 55 total, so perhaps waiting until closer to kickoff might get you a better line. The defense of the undefeated Spartans (6-0) has been stout this year, giving up 20 or more points just three times and never allowing more than 24.

That defense will be tested for sure by the 5-1 Broncos, who have racked up 36.2 points per game. But Boise State was strong defensively as well, holding three of its opponents to 21 points or less. I foresee a defensive chess match with a couple of chunk plays that will decide the winner.

The nation’s third-best offense in Alabama collides with Florida, which is known for giving up bundles of points, in what surely will be a fun SEC championship game. ’Bama, racking up 49.5 points per game, is not only an offensive powerhouse but defensively has allowed 17 or fewer points in each of its last six games.

Of course, slowing down Florida QB Kyle Trask will be a difficult task as he leads the country in passing yards and passing touchdowns, though Alabama QB Mac Jones has been nearly as dominant in his own right. I don’t really see any way that this Gators defense, fresh off allowing 37 points to LSU, will slow down the juggernaut Crimson Tide offense that can beat you through the air or on the ground. Look for a beatdown at Mercedes-Benz Stadium.