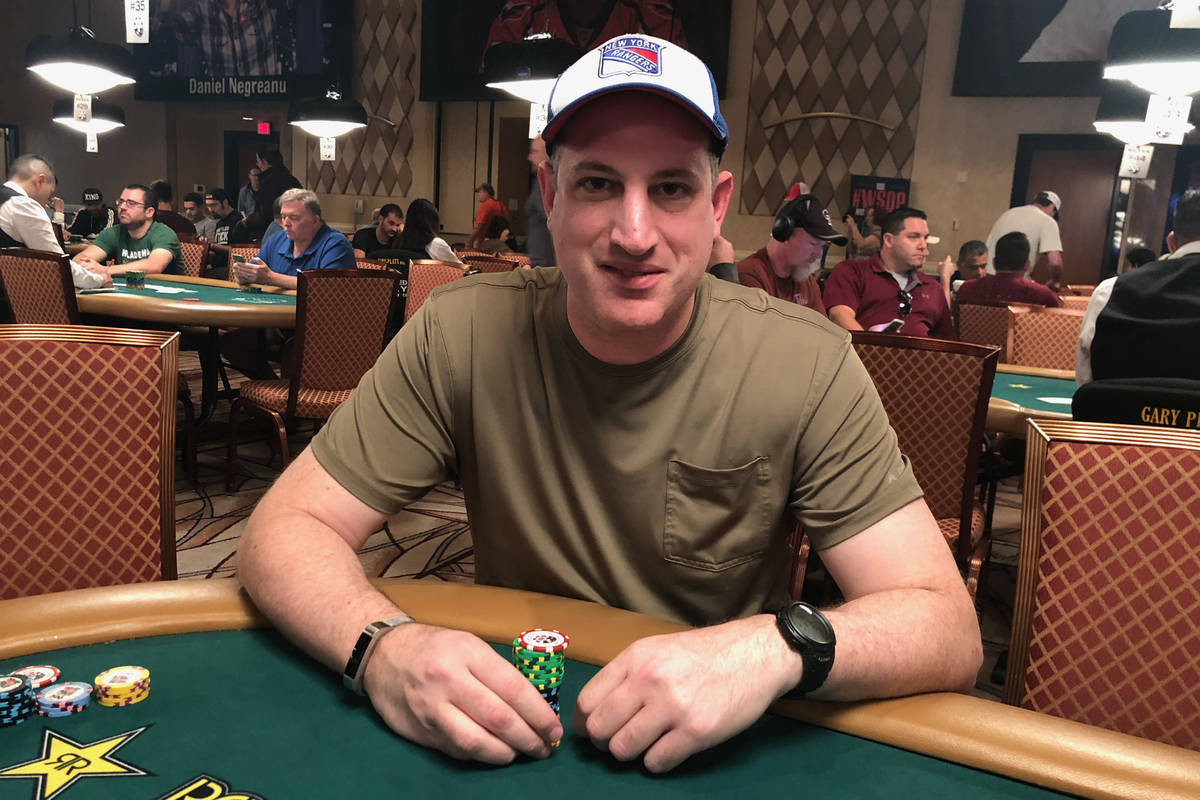 Some poker players say they don’t care about the money. Gershon Distenfeld actually means it.

Distenfeld, a 44-year-old New Jersey resident who works in finance, said he will donate all of his winnings from the World Series of Poker Main Event to charity, an amount that could be more than $2 million (after taxes).

The final table of the U.S. portion of the Main Event, the $10,000 buy-in No-limit Hold’em World Championship, will be played Monday at the Rio. The winner will face international winner Damian Salas of Argentina heads-up for the title and trophy bracelet Wednesday — on Distenfeld’s 45th birthday.

Distenfeld works for the asset manager AllianceBernstein as co-head of fixed income and director of credit and appears frequently on Bloomberg TV and CNBC. He has been married for 20 years to Aviva, and they have three daughters — Shoshana (19), Talia (15) and Esti (13) — and a 4-year-old son, Aryeh.

“I’ve been very fortunate in my life and my career,” Distenfeld said. “I’ve done quite well. My family and I have what we need. … I’m really not playing poker for the money. I’m playing it more for the challenge, for the intrigue, for the competition.”

Distenfeld said he and his wife have identified four charities that each will get one-eighth of his winnings, an amount that ranges from about $10,000 each if he finishes ninth to about $285,000 if he wins the bracelet.

He said he is working on identifying more charities to divvy up the other 50 percent of his winnings. He also said he will make a donation to his local food pantry in Bergenfield, New Jersey.

Distenfeld said he has been interested in poker since Chris Moneymaker’s shocking Main Event victory in 2003, and like Moneymaker at the time, Distenfeld is an avid amateur. He has a little more than $10,000 in career tournament earnings, according to the Hendon Mob Poker Database.

Distenfeld said he has come out to the WSOP for a week the past few summers to play in a few events, but never the Main Event.

“I always dreamed of playing the Main Event,” he said. “I figured I’d probably play in it one day, maybe after I retired or something.”

The coronavirus pandemic wiped out this summer’s live WSOP, but Distenfeld scored his first two cashes in WSOP events in the WSOP Online. He was resigned to waiting until next summer for his shot at WSOP glory until a hybrid online/live Main Event was announced for December.

That meant Distenfeld could play from his New Jersey home. He entered and found himself sixth in chips out of the 71 players remaining after the first day.

That sent ripples through his office among several of the analysts who are also avid poker players, he said.

“Some of my quants at work told me I had a 39.3 percent chance of making the final table,” Distenfeld said.

He said he had some ups and downs on the second day, but he was never in too much danger of being eliminated. He ended up sixth in chips of the nine remaining heading to the final table.

Distenfeld said he was excited — but not as much as his wife.

“Toward the end she was shrieking,” he said. “Her and my daughter were standing behind me; they were shrieking behind me. They couldn’t believe it. I was more just dumbfounded. I was just staring at the screen. … It’s kind of surreal. It hasn’t fully sunk in. I wake up some mornings and think it’s a dream.”

Distenfeld said his first Main Event will certainly not be his last.

“My guess is after this experience I probably will come play the Main Event every year,” he said. “I’m guessing I’m going to feel the need to.”

— When: Monday at the Rio