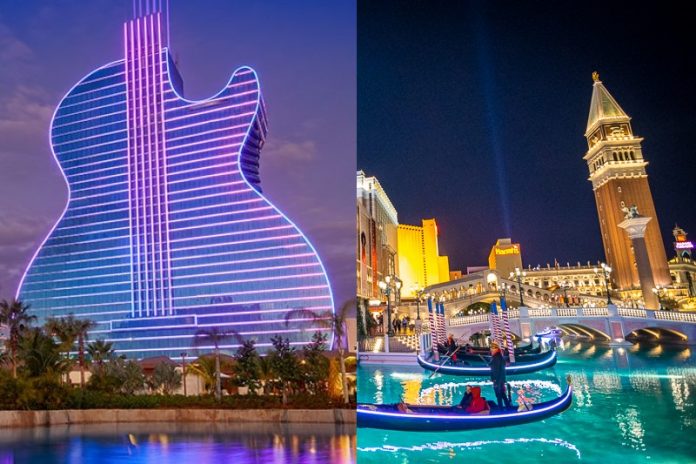 Last October, rumors circulated that Sands might be ready to dump Vegas Strip casinos Palazzo and the Venetian. Now Hard Rock International has its eyes on the prize.

The pandemic plunged casinos into chaos, and Las Vegas was hit especially hard. Most of the local economy relies on gambling and convention visitors, so the coronavirus lockdown put a serious dent in the bottom line. One result of the lockdown was the closure of many Vegas casinos midweek, when visits were lowest.

Rumors circulated that Sands might be leaving Las Vegas in favor of other markets, notably in Asia. Sands already has a Venetian in Macau, so maybe owner Sheldon Adelson feels that two Venetians are redundant. Both Las Vegas properties could fetch $6 billion if sold.

Financial experts claim that few buyers could produce the kind of capital necessary to purchase the two Sands properties, but Hard Rock International is one of the companies with enough juice to do it.

According to a tweet by the local experts at Vital Vegas, Hard Rock International owner Jim Allen has expressed interest in buying the Sands casinos. Allen has already stated his belief that Las Vegas will make a strong comeback as soon as air travel resumes. Since Vegas relies heavily on out-of-town visitors for its revenue, Allen sees dollar signs in the future.

“We are a believer in the Las Vegas market on a long-term basis,” Allen stated.

While Sands focuses its casino conquest outside of Vegas, Hard Rock International continues to expand its interests on a global scale. After Virginia loosened its gambling laws, Hard Rock swooped in with a bid to develop a Hard Rock Resort and Casino in Bristol, VA.

Now Hard Rock is looking for a prime position on the Las Vegas Strip to plant its guitars, burgers, and slots.

Disclaimer: All images are copyright of their respective owners and are used by USA Online Casino for informational purposes only.