The Cowboys enter the final week of the regular season with a chance to make the playoffs. This was an unthinkable scenario when this club was 2-7 following a 24-19 loss to the Steelers on Nov. 8.

But Cowboys coach Mike McCarthy has preached to not only this team but to a Green Bay Packers team he coached for 13 seasons, playing your best football in December can determine a season.

The Cowboys are 3-1 in December with a chance to extend their three-game winning streak should they defeat the Giants on Sunday. A Cowboys victory, along with a Washington loss or tie to the Eagles on Sunday night, clinches the NFC East. Dallas can also get into the playoffs with a tie and a Washington loss.

Before playoff seeding can occur, the Cowboys’ ability to push through so much this season and have a strong December must be taken into account.

“It’s a mindset,” McCarthy said. “It’s something that’s talked about as far as how we train, scheduling. I think scheduling, how you train your football team is obviously very important, probably more important than maybe some others think. We spend a lot of time on that. I believe in trend lines and the opportunity to try to hit certain targets.”

Having a healthy team, finding an offensive and defensive rhythm and forcing turnovers are the keys late in the season.

The Cowboys, while still missing key players such as quarterback Dak Prescott, both offensive tackles, Tyron Smith (left) and La’el Collins (right), and right guard Zack Martin and numerous defensive players to injuries, have overcome it. At one point the Cowboys lost four consecutive games and appeared done.

“I think it’s funny because I take pride in like two or three weeks ago, maybe a month ago, I was sitting up here saying, we still have a shot,” running back Ezekiel Elliott said. “It was after the Philly game, I’m saying, ‘We’re still in it.’ You guys [the media] are like, ‘yeah, right.’ I can just hear it in your tone of voice. I’ve said it a couple of times since then. Everyone’s like, ‘Yeah, right.’ And now we’re here Week 17 and we’re right there in the mix.”

The inconsistencies of the defense continue to hurt Dallas, but this group is creating turnovers. In the last three games the Cowboys forced 10 turnovers turning that into 47 points. McCarthy has said creating turnovers is the No. 1 component to success.

Without Prescott, out with a fractured ankle, the quarterback position endured numerous changes. Andy Dalton has secured the position after missing two games with a concussion and testing positive for the coronavirus.

During the three game win streak, the offense is averaging 358.6 yards and 36 points per game. Elliott played his best game of the season in a victory over the Eagles with 105 rushing yards and receivers Michael Gallup (6-121, two touchdowns) and Amari Cooper (4-121) produced strong games and fellow receiver CeeDee Lamb scored on rushing and receiving plays.

“Maybe we’re not where our record wants to be,” center Joe Looney said. “But to see these guys put in the effort and the hard work that it takes, it’s truly unbelievable. So I’m really happy to see our team do that.”

The last time the Cowboys finished December/January with an above .500 record was 2018 when a 3-1 mark just clinched playoff berths and a NFC Wild Card game victory over Seattle. Finishing strong doesn’t always lead to playoff success or clinching playoff berths, in 2017 Dallas finished December 3-1 and still missed the postseason.

If what this final month has revealed is the Cowboys finally solved their nearly season-long problems to give themselves a chance to make the playoffs.

“Because at the end of the day, we’ve all seen it happen,” McCarthy said. “You get hot in December, it’s the way you want to enter the playoffs, because anything can happen in the playoffs. It’s something I’ve always focused on and always talked about it with the team and paid close attention to how we train our football team, particularly coming out of October into November and then into December.” 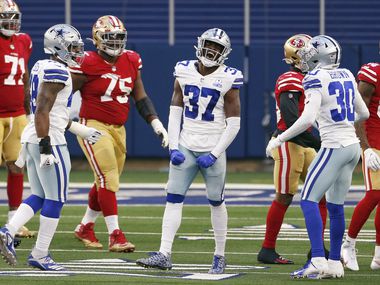