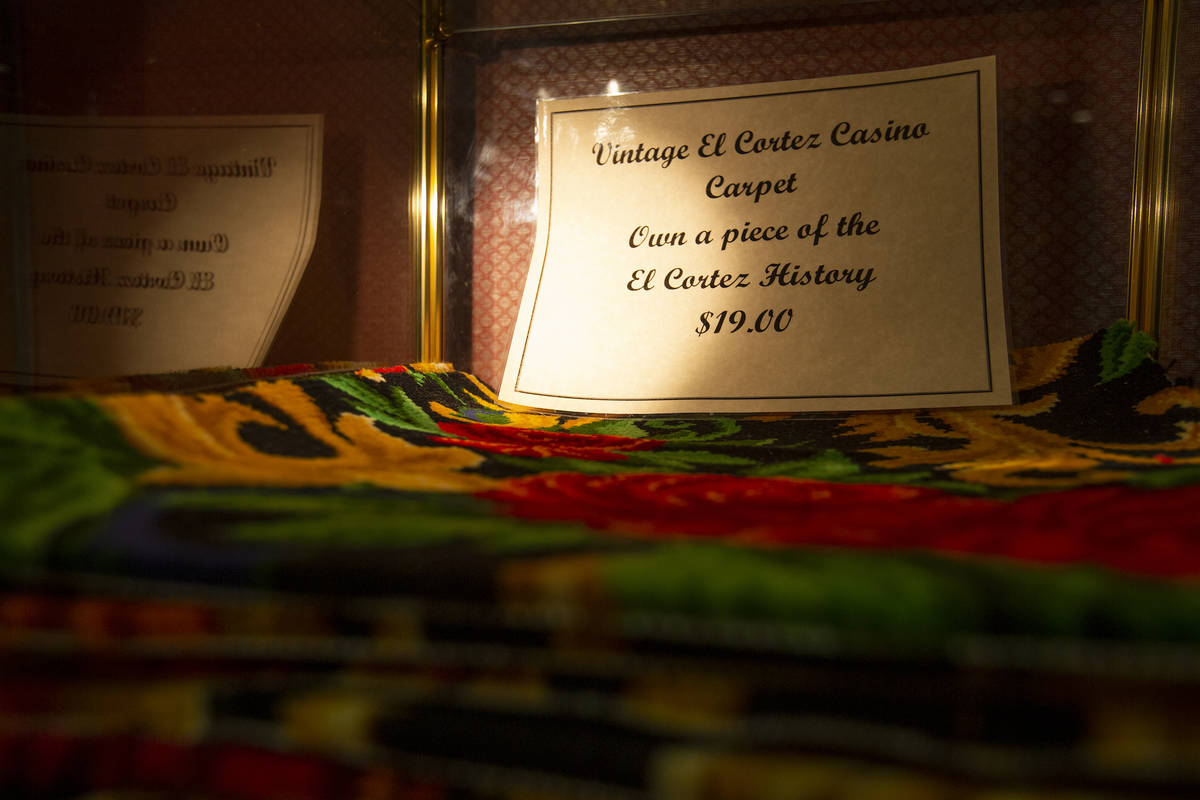 It was a light bulb moment, a pack of well-dressed dudes illuminating the enduring appeal of floral floor covering about as subtle as Clark Griswold’s Christmas lighting.

Adam Wiesberg remembers well the scene from about five years ago.

The general manager of the El Cortez recalls a group of buddies strolling through the casino when one of them dropped to his knees and caressed the rose-adorned fabric beneath his feet — as if professing his fealty to the Gods of Gaudy.

“He was like, ‘This carpet! Oh, I love this carpet!’” Wiesberg remembers, his voice a cocktail of amusement and incredulity. “The longer I’ve been involved with the El Cortez, the more it isn’t surprising to me. The carpet is a symbol of the El Cortez.”

So in September, when the hotel replaced the carpet of 13 years as part of a $25 million renovation project, a growing legion of El Cortez diehards demanded their due.

“I started getting requests from people I know, ‘Hey, if you’re changing out the carpet, can I get a piece?’” Wiesberg says. “Then it sort of took off to where we’d get multiple emails and calls a day, ‘How can I get a piece of the old carpet?’”

Yes, you read that correctly: This is a story about carpet.

No, you shouldn’t be shocked: the El Cortez tends to have that effect on plenty of folks.

“I was so, so happy they did that,” says Holly Vaughn, owner of Battle Born Las Vegas, which produces Nevada-themed pins and apparel, expressing enthusiasm for the decision to sell portions of their old carpet.

Battle Born created a pin designed after said carpet that was so popular, it sold out.

“Other casinos might not have such an exuberance of people who want to purchase the carpet,” she notes. “I think it comes from being such a dependable, standby, really accessible property. It’s one of the few places in Vegas that hasn’t changed.”

It afforded him his very first taste of battered crustacean.

That was when Dennis McBride visited a pirate-themed eatery at the El Cortez with his parents when he was a kid, where he was introduced to a casino cafe staple: fried shrimp.

“That’s a Vegas-y memory,” recalls McBride, former director of the Nevada State Museum, who retired in April. “In the middle of the desert I got to eat fresh, fried shrimp.”

Years later, while a student at UNLV, McBride worked downtown at the now-shuttered Lady Luck casino.

After his shift, he’d frequently stop at the nearby El Cortez and test his luck on the roulette wheel in a room that hasn’t changed much in four decades.

Therein lies much of the El Cortez’s appeal.

In a city that’s constantly evolving, where properties come and go like flights at McCarran, and the past is as hazy as a desert mirage, the El Cortez is like a chunk of cement in an hourglass, largely refusing to submit to the passing of time.

Walk through the place, you’ll see: the clutch of vintage rooms accessible only by stairs, defying such modern flourishes as the elevator; the clang of copper showers generated by winning spins of coin-operated slot machines; the shiny black 1941 Lincoln Zephry parked behind velvet ropes in the lobby; the iconic hot pink neon El Cortez sign still buzzing atop the hotel’s facade, which has remained the same since its opening 79 years ago.

Yeah, some rooms have been renovated. This is not a place preserved in amber. But change hasn’t changed the El Cortez much.

“When you look at a lot of the other properties, it’s the one that figured out how to renovate and still keep that sense of history about the place,” says Lynn Zook, historian, filmmaker and author of books such as “Gambling on a Dream: The Classic Las Vegas Strip 1930-1955.”

The El Cortez continues to stand as the connective tissue between Vegas’ past and present.

“It’s one of the last properties downtown that gives a sense of continuity in the history of Las Vegas,” McBride says. “I mean, things change so fast. They get torn down. (The El Cortez) gives me a sense of rootedness, a sense of home — particularly these days, when everything is so chaotic. There’s a sense of stability and dependability at the El Cortez that I think is very important.”

The new El Cortez carpet is aesthetically in sync with the old, a bright, bold, flower-strewn burst of tropical thunder indebted to wild times in a wild island of the Caribbean.

“The carpet we put in is a very similar tone,” Wiesberg explains. “It comes from the Havana, Cuba, era of gambling. That’s where the designers got their inspiration from, where gaming, especially mob gaming, got its start and it had a heyday.

“Part of El Cortez’s rich history is the mafia,” he continues. “Of course, they were here in the 1940s. It’s been established that this was really the first hotel-casino that they were involved in.”

Wiesberg is giving a nod to the brief period of time when gangster Bugsy Siegel owned the place beginning in 1945.

It’s been a family-owned business ever since, which fans like Vaughn feel adds to its come-as-you-are charms.

“It doesn’t feel corporate, like a lot of other casinos do,” she says. “I think that really comes through.”

Preserving the property’s past while adapting to the future has its challenges, though.

“It is a balancing act, because the cult following of the El Cortez doesn’t want us to change anything,” Wiesberg explains. “But we have to change and evolve all the time — that’s what keeps us relevant.”

McBride acknowledges being among those who holds his breath when changes are made.

“When something is going to go on at the El Cortez, the first thing that pops into my mind is, ‘Oh no, what are they going to do next?’” he says. “I don’t have that feeling with any other property in Las Vegas. But the El Cortez and the sign? It’s an emotional anchor.”

That anchor will remain embedded in the depths of downtown Las Vegas — even when certain carpets come and go.

“It’s funny,” Weisberg notes, “people call me and say, ‘That thing with the carpet is weird. It’s weird that everyone is so obsessed with this carpet. But save me a piece.’ ”