West Bromwich Albion have sacked Slaven Bilic and look set to hand Sam Allardyce the reins on a six-month contract.

The decision to relieve Bilic of his duties today has come as a surprise despite the reports circulating in the press over the last few days, given that West Brom recorded a very impressive 1-1 draw with Manchester City at the Etihad on Tuesday evening.

Bilic deployed an ultra-defensive system and camped West Brom in their own half in a shape that, at times, resembled a flat 6-3-1. Given that performances and results were improving as Bilic went increasingly defensive in his approach, it is perhaps an odd decision to replace with him someone as defensively-minded as Allardyce.

Then again, West Brom are 19th in the table and have won just one of their first 13 Premier League games this season.

Build on the defensive resilience

Things have been much better for West Brom over the last few weeks, aside from the 5-1 defeat to Crystal Palace, and that gives Allardyce a useful foundation upon which to build. The former Bolton and Newcastle manager is renowned for playing a conservative style of football, favouring powerful midfielders, long balls forward, and a sturdy back four that compress space between the lines.

West Brom’s squad doesn’t entirely fulfil that requirement, but the showing against Man City will give Allardyce and his players belief they can work together, grinding out points as they look to hit 40.

Semi Ajayi is someone Big Sam will come to rely upon, while Sam Johnstone is a very dependable goalkeeper. Higher up the pitch, we have already seen plenty of evidence that Grady Diangana and Matt Phillips will dig in, tracking back to do the dirty work.

Bilic chopped and changed quite often this season, largely because his preferred system used last year just wasn’t working. His flexibility was beginning to look like a strength, given the fluidity of the hybrid 4-5-1/5-4-1 used at the Etihad, but nevertheless a top priority for Allardyce is to find one formation and stick to it. 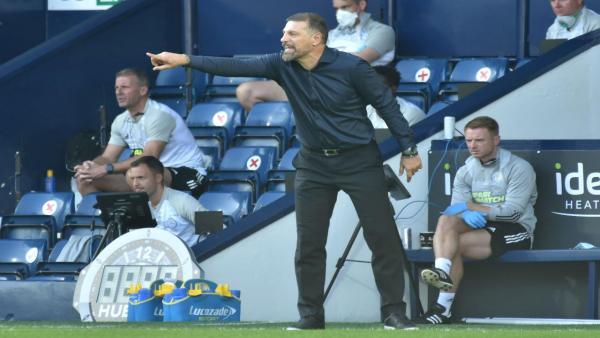 That means selecting a consistent first 11, too, so that the West Brom players can gel together and trust one another in defensive zones. The most likely option is a 4-5-1 with two creative dribblers out wide, which would provide Allardyce’s players with the option of quick counter-attacks launched via long balls down the channels.

West Brom will need a three-man midfield of battling types to survive in this division, and with Allardyce rarely operating in a back three during his career it is unlikely Bilic’s 3-5-2 will remain.

Find a way to get Diangana and Pereira firing

West Brom’s promotion from the Championship last season was inspired by the excellent performances of Diangana and Matheus Pereira, two talented forwards who often swapped positions and flitted across the front line to create. They contributed 16 goals and 24 assists between them in 2019/20.

So far in the Premier League, they have provided two goals and two assists. Diangana, having previously played for West Ham, has adapted more quickly and is consistently a lively presence in the final third, but Pereira hasn’t been as good.

If West Brom are to survive this season they are going to have to score more goals. Only Burnley and Sheffield United have scored fewer than their 10 in 13. Without a top class striker, Diangana and Pereira need to be firing on all cylinders; Allardyce’s master plan has to focus on freeing these two to rediscover their 2019/20 form.

Bilic’s departure was an inevitability after communication between manager and board broke down. According to reports, Bilic was disappointed about the sale of star defender Ahmed Hegazi and about the club’s inability to secure his top targets.

Allardyce will hope for more sway in the transfer market, because this squad needs some serious improvements.

The main priority is finding a centre-back to replace their leader Hegazi, but in all honesty West Brom probably need an entire new core to stand a chance of survival.

Karlan Grant needs more time to settle after his £15 million move from Hudddersfield, but one goal from nine games is not a good enough return and West Brom could do with bringing in an experienced striker.

A defensive midfielder is also needed. Romaine Sawyer‘s performances haven’t been good enough to compliment the work of Conor Gallagher.

Can West Brom stay up?

Unfortunately for West Brom, it is unlikely Allardyce will be able to do enough to keep them above the dotted line. The pandemic has made the gap between promotion and the start of the Premier League season shorter than ever, explaining the Baggies’ relatively poor transfer record, and without high quality players even a specialist like Big Sam won’t be able to turn things around.

Sheffield United look buried, but Brighton and Burnley have much stronger squads than West Brom and ought to finish above them. That suggests one of the bottom three places is reserved for the Baggies, who are likely to be relegated alongside the Blades and Fulham regardless of how Allardyce goes about his work.