Sadio Mané to bounce back at the Amex

Goalscorer: Sadio Mané to score anytime @ 11/10
Sadio Mané (18 goals from 14.5 xG) played an instrumental role in securing Liverpool’s first Premier League title for 30 years last season, and while Mohamed Salah (19 goals from 20.5 xG) was also outstanding, it’s fair to say Mané was more efficient in front of goal. However, while the Senegal international began the new season In blistering fashion, the goals have since slowed down. Mané has now failed to score in four league games, but after recording 0.6 xG/avg match this term, it seems inevitable he’ll soon put an end to his uncharacteristic barren run. Salah has just returned to first team action after testing positive for COVID-19, so Mané should be the sharper of the pair, and he can find the back of the net on the South Coast.

Carded: Bissouma to be booked @ 12/5
Liverpool should dominate possession here, throwing down the gauntlet to Brighton, and it’s likely the hosts will have to maintain a robust shape if they want to repel the champions’ waves of pressure. Yves Bissouma will be aiming to protect Brighton’s back four in his holding midfield role, but he’s already picked up three yellows this term, making 18 fouls. It seems sensible to side with him to receive a caution.

Same Game Multi: Liverpool Win, Sadio Mané Anytime and Under 3.5 Goals @ 5.13
Brighton are searching for consecutive wins for the first time in the Premier League since November 2019 here, although welcoming Liverpool won’t be an easy task. Regardless, the Seagulls have shown they’re more than capable in attack (1.5 xGF pg), although they might appear one dimensional on Saturday afternoon, with the impressive and energetic Tariq Lamptey suspended. It’s been a week of highs and lows at Liverpool, from creating their highest xG since October 2018 against Leicester on Sunday, to recording their lowest at Anfield since Infogol’s records began since 2014 in midweek against Atalanta (xG: LIV 0.2 – 1.4 ATA). They’ve shown they can bounce back from adversity in the past, though, and they can edge this game with Sadio Mane getting onto the scoresheet. The Reds still boast the division’s strongest attack (2.5 xGF pg) , and their disappointing result against Atalanta could mean they’re now more of an attractive price at the Amex.

Leeds will struggle to cope with Calvert-Lewin

Goalscorer: Dominic Calvert-Lewin to score anytime @ 9/5
While Carlo Ancelotti has yet to deliver any real success at Everton, there’s no denying the Italian has ignited Dominic Calvert-Lewin’s career. The 23-year-old is making tremendous progress under Ancelotti’s stewardship, and is currently the Premier League’s top goalscorer with 10 goals (6.9 xG), recording 0.8 xG/avg match. If that wasn’t impressive enough, that notably means the Englishman has scored as many goals as Manchester City. He comes alive in the opposition’s box, and his trademark poaching instincts could prove lethal against Leeds, with Marcelo Bielsa’s side struggling in defence this season (1.7 xGA pg). He should get a few opportunities to add to his tally here, although considering the form Calvert-Lewin is in, he will likely only need one. 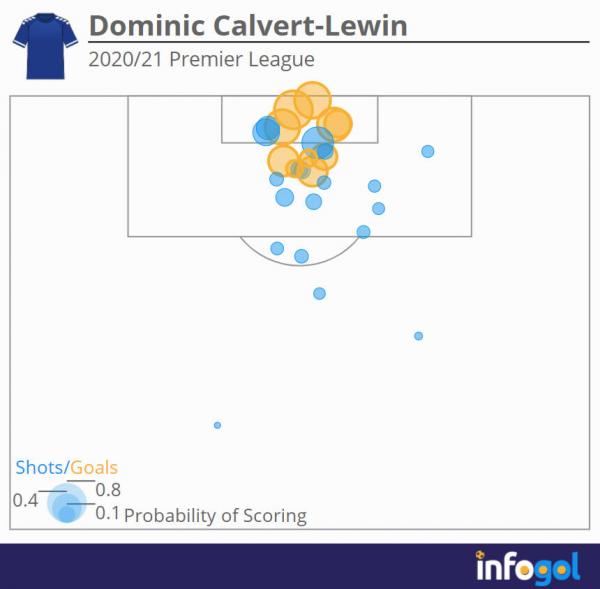 Carded: Allan to be booked @ 11/4
Abdoulaye Doucouré (3) and Allan (3) have both picked up their fair share of yellow cards for Everton this season, both tasked with marshalling the Toffee’s midfield. However, Allan has actually made 17 fouls, significantly more than Doucouré (8) and his petulance could get him into the book again here, with certain players at Leeds, namely Raphinha, more than capable of drawing a foul with pace and trickery.

Same Game Multi: Leeds or Draw and BTTS @ 2.486/4
Everton’s 3-2 win over Fulham wasn’t overly convincing on Saturday, just marginally winning the xG battle (xG: FUL 1.9 – 2.0 EVE). It did put an end to their poor string of result, though, after losing three consecutive games. Their underlying numbers across that winless period were concerning (0.70 xGF and 1.8 xGA pg) , and after making a sensational start, Everton have shown weakness, and they are clearly opponents Leeds can compete with in all areas across the pitch. While the West Yorkshire club have their own defensive questions to answer, they’ve looked consistently threatening in attack (1.6 xGF pg). The Infogol mode believes Leeds are value to avoid defeat (54% double chance), but it could be foolish to think the hosts won’t score.

Werner can deliver at the Bridge

Goalscorer: Timo Werner to score anytime @ 13/10
Despite Timo Werner being a relatively short price to score anytime on Sunday, siding with the German to find the back of the net still seems like a sensible play. Since Chelsea’s loss to Liverpool, they’ve averaged 1.9 xGF per game in the league, creating high quality chances in front of goal at a staggering rate. Werner arrived in England with high expectations upon his shoulders, and while he’s scored four goals from 3.6 xG so far, there’s seemingly more to come. Frank Lampard’s inclusion of Tammy Abraham in Chelsea’s starting line-up appears to get the best out of Werner, and the pacy forward (0.4 xG/avg match) can benefit from Abraham’s ability to hold the ball up, which brings others into the game. Tottenham should sit deep, but Werner should be able to find space through Spurs’ lines of defence, and his electric turn of foot could prove devastating against Eric Dier and Toby Alderweireld.

Carded: Dier to be booked @ 21/10
This fixture produced fireworks four years ago, when tensions between Chelsea and Tottenham reached boiling point. Incredibly, 13 yellow cards were handed out on that occasion, with nine solely to Tottenham’s players, the most for any team in a single match in the Premier League era – the game was dubbed ‘the battle of the Bridge’ in the aftermath. While this fixture should be played with cooler heads, the unpredictability of Jose Mourinho, especially with the Portuguese returning to his old club, could ensure impassioned performances. Eric Dier seems a likely candidate to receive a booking, and this clash is one to keep an eye on.

Same Game Multi: Chelsea Win and BTTS @ 3.62
As previously mentioned, Chelsea have been almost flawless since their defeat to the champions in September. Furthermore, Frank Lampard made multiple changes in midweek against Rennes in the Champions League (xG: REN 1.3 – 2.1 CHE), which suggests he has one eye on this upcoming game against Tottenham. Chelsea have recorded exemplary underlying numbers all season (1.8 xGF, 1.0 xGA pg), and while Tottenham have also been outstanding in attack, they’re conceding chances too regularly (1.3 xGA pg), which could leave them susceptible to a Chelsea barrage here. Manchester City created over 2 xG against Spurs last weekend, and it’s highly unlikely Chelsea won’t find a way past Hugo Lloris if emulating Pep Guardiola’s side attacking performance, in terms of creating chances – which they are more than capable of doing.