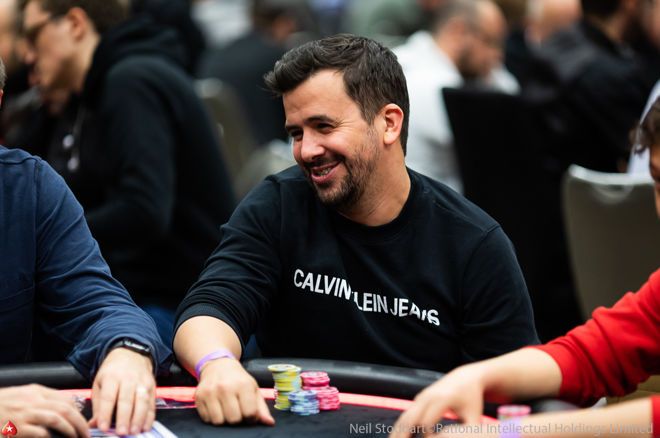 Andras “probirs” Nemeth and Andrey “ThePateychuk” Pateychuk were just two superstars who helped themselves to a top prize of a Sunday Major at PokerStars this weekend.

Both players are no strangers to final tables of tournaments, especially in high stakes games where the pair seem to excel.

Nemeth’s victory came in the $1,050 Sunday Warm-Up, a tournament that attracted a compact field of 62 entries. This resulted in the top nine finishers sharing the $62,000 prize pool.

Christian “WATnlos” Rudolph fell in 10th place to set the final table and burst the money bubble at the same time. This paved the way for the likes of Torben “Tralllle” Soerensen, “P0KERPR02.0” and Andrey “Anjeyyy” Novak to see a return in their investment.

Jans “Graftekkel” Arends fired three bullets at this event and the final once saw him eventually finish sixth for $3,936. “Remi_Lebo_10”, and “Sintoras” crashed out before Viktor “papan9_p$” Ustimov saw his tournament end abruptly in third-place, a finish worth $9,379.

Heads-up pitted together two legends of the game. Nemeth locked horns with Niklas “Lena900” Astedt and the pair struck a deal to flatten the payouts. This meant Astedt got his hands on $15,485 when he busted in second place, which was more than the $13,777 Nemeth collected.

The Russian found himself heads-up against Brazil’s “4FKvothe” for the lion’s share of the prize pool. Pateychuk, a former World Poker Tour champion, got the job done and bushed his Brazilian opponent aside. Second-place weighed in at $15,990 while third-place finisher “LOBAXHiNO” of Argentina won $11,604, the only other five-figure score of the competition.

Some of the other victories at PokerStars on September 27 included:

Spin & Go Your Way to a PokerStars Sunday Million Seat

This sum increased to $4,257 by the time the eight-handed final table was set. The top five finishers each secured a five-figure score for their efforts.

Jeremy Saderne fell in fifth and collected $10,199 with David Stephenson’s fourth-place exit being worth $14,377. Brazil’s Marllon Pinto banked $20,472 when he crashed out in third, which left Daniel Neilson and Viktor Ustimov to butt heads for the lion’s share of the prize pool.

The heads-up battle went Neilson’s way and he scooped an impressive $41,858. Ustimov padded his bankroll with a $29,854 consolation prize.

The $55 buy-in Gladiator was one of the biggest partypoker tournaments this weekend thanks to 2,288 players buying in and creating a $120,120 prize pool, which is very impressive for a mid-stakes event.

“benatto” was the last player standing from this ample field and victory was worth $7,110 from the main prize pool plus an additional $3,704 worth of bounty payments. This combined score of $10,814 for a $55 entry is a great result.

Some of the other partypoker victories included:

There were some decent scores over at 888poker where Ukraine’s “yarik1903” triumphed in the 888Millions Sunday Special, a $100,000 guaranteed tournament that cost $215 to enter.

A 458-strong field resulted in the tournament overlaying again, not that yarik1903 cared because it meant their first-place prize was worth $19,500. Two other players secured five-figure payouts. “WestCliff26” netted $11,000 for their third-place exit while runner-up “Holdababy” reeled in a $14,500 score.

Some of the other 888poker results included:

Check Out the Daily Millions Superstorm Events at 888poker

As has been the case recently, GGPoker was the home of some massive online poker tournament scores.

The biggest of these weighed in at an incredible $333,513, which Blake “Beast2018!” Bohn got their hands on courtesy of winning the High Roller MILLION$ event. The champion defeated Fabrizio “UknowWhoIam” Gonzalez heads-up to bank the monster-sized prize, leaving the runner-up to scoop $228,523, which isn’t a bad runner-up prize by any stretch of the imagination.

Ireland’s Conor “TheMajority” O’Driscoll had a career-best online score of $17,116 before Sunday night’s GGSOP MILLION$ but now he can brag of a $228,851 haul. O’Driscoll topped a Final Day field of 2,595 including defeating Alison “Ippo88” Eleres heads-up.

These are some of the other big wins at GGPoker on September 27:

The Stars Group is a majority shareholder in Oddschecker Global Media, the parent company of PokerNews.