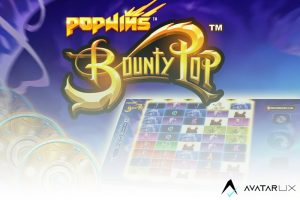 This is the biggest award ever won on an AvatarUX slot since the game developer was founded in 2018.

BountyPop is a pirate ship-themed slot with five reels, three rows, and a plethora of special features. The game was rolled out on November 30 as the fourth title in AvatarUX’s PopWins slot series.

The slot is packed with action as symbols roll onto the screen, each of them triggering unique sounds and animations and potentially triggering the game’s features. As mentioned above, the game is equipped with AvatarUX’s PopWins feature which is activated on every hit. It clears winning symbols and replaces them with two new icons, making the reels expand up to six rows in base game and up to nine in Free Spins.

With up to nine rows, Free Spins offers 59,049 winways. When the grid expands up to six rows during base game, the Base Mystery Wheel is triggered. When Free Spins ends with all nine rows, the Mystery Wheel is unlocked. Players can progress through Base, Bronze, Silver, and Gold wheels with great potential for big prizes on both the inner and outer wheels. The Gold wheel offers nine symbols and multipliers with rewards of between x3 to x100.

How the Win Happened?

AvatarUX also provided details on how the Swedish player hit their win. The unnamed player wagered SEK200 and hit the spin button. They landed three scatters and gambled their free spins using the special feature to level up from six free spins to nine.

But that was not all. The bonus Gold wheel landed its arrow into the inner ring on the very first spin to stop on x100 for a mighty SEK1,748,000 win.

Commenting on the biggest ever win paid out by AvatarUX, the studio’s Managing Director, Marcus Honney, said that the fact the payout was landed on their newest slot makes it even more special. He added that their Swedish winner experienced everything the PopWin mechanic can offer, from its Popwins and Gamble Free Spins option to its mystery bonus wheel.

AvatarUX is an Yggdrasil Masters Partner and its games, including BountyPop, are exclusively distributed by Yggdrasil.