QAnon—the conspiracy theory that elite Democrats, government officials, and celebrities are part of a cannibalistic, child-sex-trafficking cult, and Donald Trump is the hero destined to stop them—has allegedly inspired kidnappings, car chases, and a murder. It has also made 28-year-old Patrick Cage a lot of money.

In 2018, Cage, a Californian who works in international environmental policy, discovered a gambling platform called PredictIt. It was an unusual betting site: Its users didn’t wager on card games or horse racing. Instead, they made predictions about politics. People put money on questions like “Will Kanye run in 2020?” and “How many times will Trump tweet this week?” Its tag line: “Let’s Play Politics.”

“You can sort of think about it like a political stock market,” Cage told me.

Cage had been following politics obsessively since the 2016 election, and he thought PredictIt would be a good way to test his newfound political acumen. So he bet that Kanye would run for president.

“That’s probably my proudest moment,” he said. “I dumped 20 cents in November 2018 and netted a dollar off that investment.”

In general, Cage’s predictions weren’t much better than if he had chosen at random. “It was a useful ego check, as, for the most part, I wasn’t very good,” he told me. But as he kept betting, he noticed bet after bet with odds that seemed completely off. According to Cage, in the spring of 2019, for example, the PredictIt market gave former FBI Director James Comey a 1-in-4 chance of being indicted in the next six months. Cage had never heard anything about a Comey indictment on the news.

“My first assumption was I must have missed something,” he said. Cage searched but couldn’t find any legitimate articles or even Google groups talking about Comey committing federal crimes. Then he checked Breitbart and other far-right sites. Still nothing. So he made a bet that Comey would not be indicted. And he kept seeing these strange bets: Would a federal charge against Hillary Clinton come by a certain date? What about one against Barack Obama?

The curious thing was that these bets were so consistent. It’s not unusual for an article or tweet to come out and temporarily create unexpected wagers. But day after day, month after month, people were betting on these weird theories. Every six months, a new version of the Clinton-indictment bet came up, and every six months, people bet that she would be charged.

That’s when Cage started paying attention to the PredictIt comments sections, where people were posting snippets of what looked like nonsense to him. And that’s how, years before most people had heard of QAnon, Cage learned that Q is an anonymous figure who claims to have a high-level security clearance and access to inside information about a devil-worshipping deep state.

All of a sudden, the bets made sense: QAnon followers believed that Q had special inside information about the future, and they bet accordingly.

“There were people who were so convicted in these beliefs that they were willing to put hundreds or thousands on the line,” Cage said. “So I started shoveling more and more money in.”

Cage began scanning PredictIt for QAnon theories and betting against them. He’d look for anything weird—usually something like suspiciously high odds that a Democrat would be indicted. Then he researched to make sure he hadn’t missed something in the news cycle. “If I saw conspiracy-theory chatter in the comments section of Google News articles, that was a plus for me,” Cage said.

When he couldn’t find any legitimate news on the bet, he’d dive into QAnon YouTube channels or message boards. If he determined that people were following a QAnon theory, he’d bet against them. Cage has made money every time QAnon has been wrong—which they have been on every bet he’s made so far, he told me. He’s put about $800 in and made around $400 in profit.

When Cage discovered what was going on, he suddenly had information most Americans didn’t have, a sort of real-time look at just how popular QAnon was becoming, down to the dollar. And now, the theory has expanded to a worldview: “It’s beyond Q at this point,” Cage said. QAnon believers swap conspiracy theories back and forth, welcoming people who are against vaccinations, people who believe the moon landing was faked, and people who follow just about every other conspiracy theory into their community.

Trump’s embrace of bizarre conspiracy theories about voter fraud have had similar effects. “It’s actually kind of alarming how delusional prediction markets are,” Nate Silver, founder of FiveThirtyEight, tweeted right after the election. “They give Trump a 12% chance of winning Nevada, a state that has been called for Biden and where he has a fairly large lead, and where there is no coup possibility since it’s run by Democrats.” 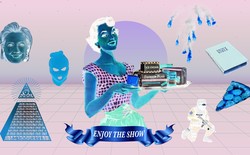 As of mid November, PredictIt still gave Trump about a 15 percent chance of winning the presidential election, even though major networks had already declared Biden the president-elect days before. These bets might be related to QAnon, too: Believers were convinced that Trump would win the election and start making mass arrests of Democrats. Some QAnon believers might still be betting as though that were the case.

Cage said people become wrapped up in conspiracy theories slowly, then all at once. A lot of people get involved with QAnon through another, more palatable conspiracy theory. A mother might join a Facebook parenting group and get drawn in by an anti-vaxxer post. Then she finds her way to other, weirder ideas.

That’s ultimately what’s so tricky about QAnon and its related world: It’s not one clearly defined group of people screaming insane theories into a dark corner of the Internet. It’s a mist quietly settling over society, and people often don’t realize they’re breathing it in. But somewhere, on the other side of Cage’s PredictIt bets, real people are losing money because they believe fervently in the predictive powers of an anonymous message-board poster.

Ilana E. Strauss is a journalist and podcaster interested in the unwritten rules of the human world. Her work has also appeared in New York Magazine, Popular Science, Politifact, and other outlets.