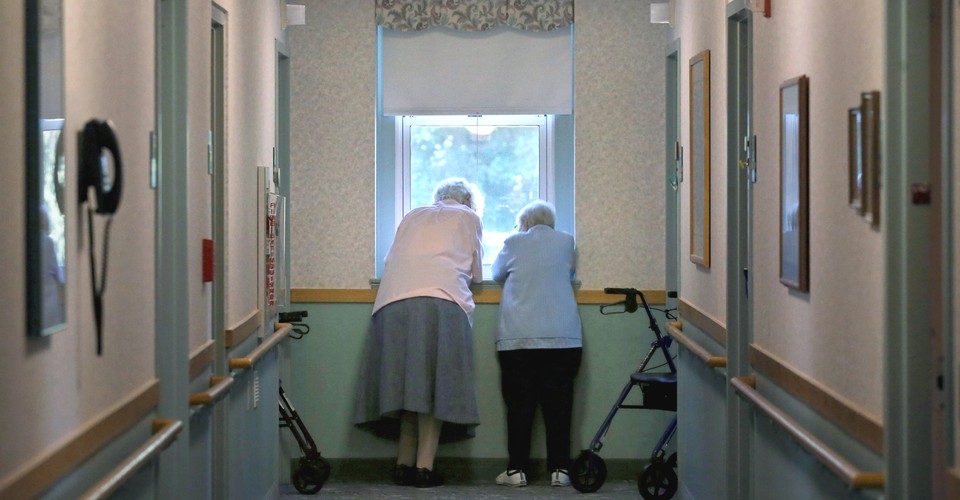 She missed seeing her children in person; she’d tried a window visit with her daughter, Christie, who lives in town, but it felt too strange to repeat. Otherwise, her new loner lifestyle was “glorious,” she said. Before COVID-19, she was always having to decide “Am I gonna do this [activity] or stay in my room and do what I really want to do?” With lockdown orders in place, she could read and write and watch TV, uninterrupted.

In October, Scott caught COVID-19. Actually, everyone at Montrose did, or at least that’s how it felt. Several residents and staff came down sick with the disease, she learned from the aides who visited her room. Three of her neighbors in the nursing home ultimately died of coronavirus-related complications. Christie called often to bring her news from the community, and one day, Scott watched from her window as a woman in the house across the street was carted away in an ambulance. Scott felt tired and weak from the disease, but she was never scared. “It’s gonna happen one of these days, one way or another,” she told me. But Scott didn’t die. She slept it off. And after a few days, she was fully recovered. She credits her confidence—and her survival—to her faith in God. “I have a very strong belief, and that’s where my security comes from,” she said.

It wasn’t until last month that Scott really began to feel the weight of the year. She couldn’t escape the feeling of restlessness, the desire to leave her room, to roam the hallways, to soak up the sunlight on the front patio. She daydreamed about driving to Christie’s house, something she did often before the pandemic. She craved a visit from her son, who lives in Duluth and whom she has not seen in nearly a year. A few weeks ago, administrators at Montrose Health Center loosened some restrictions, allowing residents to watch the finches in the aviary or go outside and win some cash at two-to-a-table bingo. Scott is happy about these developments. But group dining is still prohibited, and she cannot leave the premises or accept any visitors.

The promise of the newly authorized vaccines has given long-term-care staffers hope. Inoculating the staff and the nearly 20,000 residents of Iowa’s nursing homes would mean that things could open back up again—that residents could be social, and potentially even visit with family members. But although most states have begun vaccinating frontline health-care workers, many people in long-term care are facing serious delays. Nursing-home residents in Iowa will have to wait until at least December 28 to receive their shots, due to a federal rule requiring states to have at least 50 percent of the amount of vaccine they need on hand before they start inoculating residents. Further delays have been caused by the fact that CVS and Walgreens, which are administering the vaccine in nursing homes, require consent from residents and their families, which in many cases hasn’t yet been given. A staffer at Montrose Health Center told me that the residents might not get the vaccine until as late as January 14. To top it off, several states are getting significantly fewer vaccine doses than local health officials were anticipating.