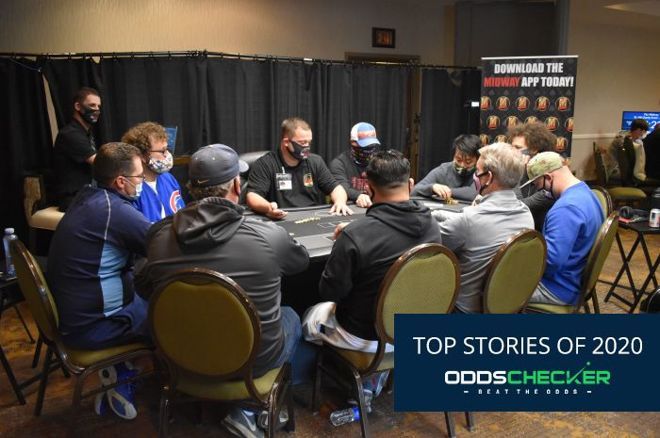 There’s no denying 2020 was filled with some outrageous stories, both in and out of the poker world. In regards to the latter, one took place in early October with a controversial silver payout debacle in the first-ever, and assuredly last, Midway Poker Tour event.

The colossal mishap resulted in many players not receiving full value on the advertised payouts, and despite tour founder and operator Dan Bekavac pledging to make players whole, $50,185 in missing value has yet to be paid as the year ends.

The new tour held a $1,100 buy-in Main Event in the Chicagoland area, albeit with a charity component with 4 KIDS Sake, Inc. to meet state charitable gaming laws. According to Illinois Charitable Gaming Acts and Regulations (230 ILCS30), organizers could only pay out $500 in cash atop the cost of the buy-in, so in this case $1,600 in cash. The remainder of any “prize” has to be awarded in a different manner.

For instance, other Illinois charity games awarded gift cards in equal value. For the Midway Poker Tour, organizers opted to award precious metals with the plan of buying them back on-site. Those plans were scuttled when the Office of the Illinois Attorney General, which oversees charitable gaming licenses, informed the tour that their buyback plan was unacceptable.

As such, instead of having a limited amount of precious metals that they could buy back and recycle for each payout, organizers had to come up with enough gold or silver to satisfy the entire prize pool. In the midnight hours of Saturday, panic set in and organizers wound up overpaying for six figures of silver. The premium they paid, roughly 30 percent, was passed on to players as lost value as no one was on-site to buy it back at the mark-up.

Will Players Get Paid Back?

The day after the tournament, Bekavac stated on a social media post that he would attempt to make players whole by paying out 30 percent of the original prizes. That totaled $62,731, but as of now, PokerNews can only confirm that $12,546 has been repaid to 19 of 21 players. Unfortunately, most of the big-money finishers, including winner Renato Spahiu who is due $16,038 in missing value of the $55,060 top prize, have not been made whole.

One of the possible reasons some players were made whole quickly while others have been left out in the cold may have to do with the Midway Poker Tour’s association with PokerBROS. Bekavac, along with partner Jason Trezak, ran the Midway Club on PokerBROS. Essentially, it was their own online poker site, for which they were collecting funds.

Because of the tour controversy, PokerBROS issued a statement stating that they were shutting down the Midway Club on their app. A former agent for the Midway Club likened the operation to a Ponzi Scheme, and speculation is that it was no coincidence that players stopped getting made whole at the same time online operations shut down.

Unfortunately, there hasn’t been much of an update since October as all parties have been radio silent in recent months. Neither Bekavac nor Trezak have made public comments since the Midway Club was shut down by PokerBROS, and representatives from the charity have stopped responding to PokerNews’ request for comment.

The Attorney General’s Office and Illinois Department of Revenue (IDOR) have been mum on the situation other than to issue the following statement to PokerNews:

“IDOR issued license #CS-00102 to MPT on September 30th, 2020. IDOR’s role in this process is to issue charitable games licenses to suppliers who are expected to abide by state law and regulations. I would have to defer any further questions to local law enforcement agencies who may have more jurisdiction over the issues you present.”

When PokerNews asked a follow-up question about whether or not the IDOR was aware of any ongoing investigation, we received the following response:

“Tricky question actually, we’re unable to comment on the existence or not of any investigation.”

There is currently no indication that any investigation is actually taking place, and it seems that if the affected players hope to be made whole at this point, they may need to seek a legal remedy.

For more on the Midway Poker Tour situation, listen to this episode of the PokerNews Podcast

Oddschecker US is 100% free to use. Get the latest odds from some of the most trusted brands in the industry, with promotions and betting tips to help you pick winners!